Car Trip Part 2 – On the road to Gibsland 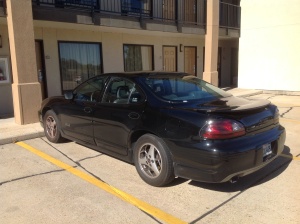 Laura and I have somewhat of a love affair going on with the south.

I’ve never lived down here, but Laura has, much earlier in her life. I know the south only from trips, so far. I would be reluctant to relocate here for a number of reasons, but I always feel more comfortable here than anywhere else I’ve been.

The first focus of this trip was to get back to Florida to see Laura’s father Bob and his wife Marion. The trip from Southern California to central Florida took about 4 1/2 days. We took very little time to look around on the way. We spent about 4 1/2 days in The Villages, where Bob and Marion live. This is a very nice “golf cart” community for seniors that covers three counties. It’s the largest community of it’s type in America.

Central Florida is nice. It’s the south, but if feels more like California to me. That could be because Florida, like California, is a giant melting pot. People from all over the country make a decision to leave their colder climates behind and move south to Florida or west to California. You know you are in the south, because of the spanish moss hanging from the tree branches, blowing in the gentle wind. The humidity is another tip off. Even when the temperatures aren’t that high, there is a softness to the air, and doing even small tasks tends to make you work up a sweat.

Perhaps the biggest difference between Florida and the rest of the South is the people. There are people from New England, the Mid Atlantic, and the Upper Midwest in large numbers. You can tell by the accents, and also by the behavior, which is not always like the “southern hospitality” that you find in Georgia or Louisiana or Mississippi or South Carolina.  I won’t go into that issue here, as Laura has already covered it.

Laura and I had a nice time in the Central Florida area, all things considered. It was great to see Bob and Marion. We got a pretty good tour of the area, and also got to tour a foundry that Bob has been doing business with for quite a few years. He is a contractor, and has been building out their facilities. I sensed a lot of love and respect between Bob and the people who run this business, and they were very nice to Laura and I, giving us one of the best factory tours I’ve ever been on (and I’ve been on a lot while working at Boeing).

Now we are back on the road, heading to Northern Louisiana. Why? Old and new Americana. We will go through West Monroe, which should ring a bell with all of you Duck Dynasty fans out there. Then it’s on to Gibsland, to visit the Bonnie and Clyde Museum. The spot where they met their end is on Hwy 154, about 8 miles south of the town. There is a marker at the spot which, from the look of the pictures I’ve seen, is about as shot up as Bonnie and Clyde were. Trip Advisor has a lot of good forum posts on this area….apparently the roads up there, especially Hwy 154, are very much like they were in the 1930s, making the area somewhat of a time capsule. I’ll let you know if it’s as interesting and charming as it sounds.

Today we are in Vicksburg, Mississippi. We decided to stay here a couple of days, and will be exploring some historic Civil War areas. We will also spend some time in the old downtown area, and in the casino.

Categories: Life on the Road | Tags: the South | 1 Comment